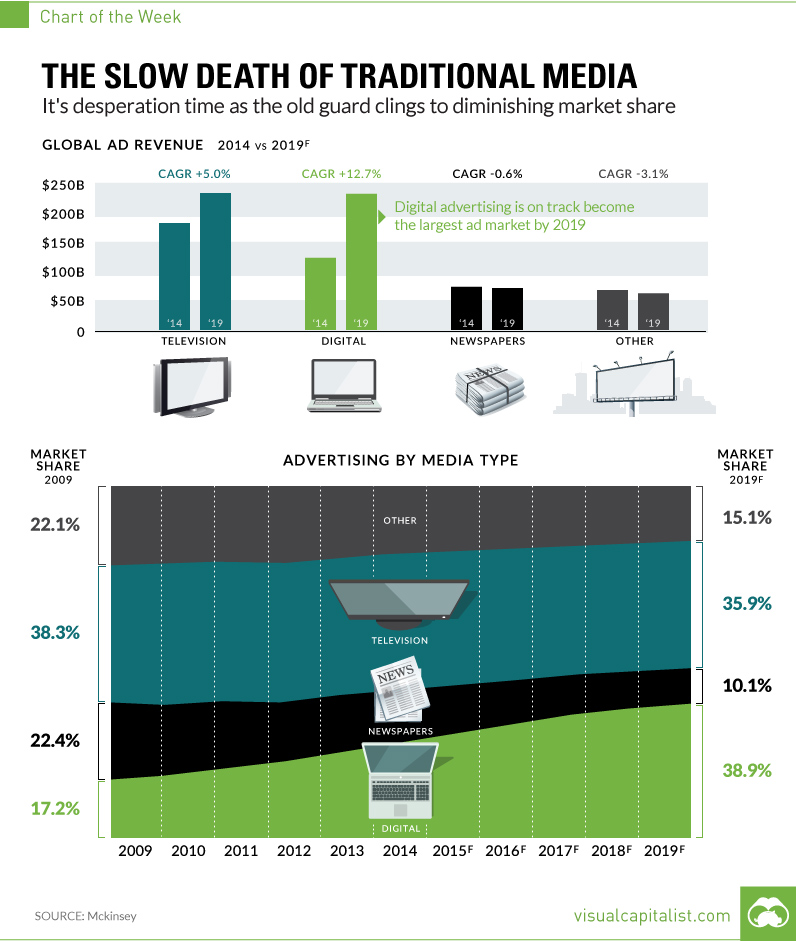 The Slow Death of Traditional Media

The ongoing conversation about the death of legacy media definitely fits that mold.

Over the last five to ten years, people have been talking about how the newspaper, magazine, or radio station would become all but obsolete. And while certainly things have changed in all of these industries, it’s clear that there has not been a full paradigm shift yet.

Here is the evidence that we have finally reached that inflection point.

In a recent interview at the City University of New York’s journalism school, Ken Lerer described the challenges of traditional media as follows:

You have to fix the plane while you’re flying it.

Lerer, a co-founder of the Huffington Post and currently the Chairman for Buzzfeed, is alluding to the fact that legacy media has to maintain old business models based on subscription and print ad revenue, while successfully venturing into the digital world. The latter category is already hard enough, even without taking into account the balancing act of the former.

The moral of the story? Some of these “planes” are going to land safely, but most of them are going to crash and burn.

The cost structure of legacy media just doesn’t make sense in today’s digital world. Overhead is high, and revenue is harder to find due to the limited success of paywalls, rampant ad blocking, and the steady fall in display ad prices due to the emergence of programmatic bidding.

Why has legacy media been so slow to adopt change? Why don’t they just lay off half of their staff, ditch print operations, and start from scratch?

It’s because their major revenue sources are as slow at adopting as they are.

In 2015, there was only one age demographic with more than half of its constituents reading a daily newspaper, and that was “65 years old and up”:

That said, the people that still read newspapers are among the wealthiest people in the country. Warren Buffett, for example, reads five a day. But even he does not know how to save the print industry from its woes.

Meanwhile, Madison Avenue has been notoriously slow at evolving to meet the needs of the digital revolution. If the biggest advertisers are still demanding the status quo, it makes it very difficult to “fix the plane”.

The most noticeable signal of change, however, is the relative success of new media companies such as Vice, Buzzfeed, and Vox – and the fact that some of their largest backers are from the old guard.

All of the above companies are “unicorns” valued at $1 billion or more by private investors, which include venture capital stalwarts such as Andreessen Horowitz, Accel Partners, Khosla Ventures, RRE Ventures, or Lerer Hippeau.

More importantly, however, they’ve also posted strategic investments from legacy media companies that are trying to wisely hedge their bets. Some of these include NBC Universal, The Walt Disney Company, 21st Century Fox, and Hearst.

Digital will become the largest channel for ad revenue globally by 2019 – investors and companies that believe in the media business should position themselves accordingly.